When we talk about storage tank safety, we always talk about tank inspection. The recent chemical spill in West Virginia turned a great deal of attention toward current tank inspection standards, and prompted new discussions about tank owners' responsibiities in terms of tank inspection and maintenance. All of that attention is good for the tank industry; safety should always be the primary concern and a well maintained field erected welded steel tank can provide incredibly safe and reliable storage for the liquids that make our country run.

Historically, tank inspection has not always been such a big issue. As business and industry grew here in the US and in Europe, so did the need to store liquids. Storage tanks were a great solution, but tank safety was not a prerequisite for tank use. Now, we have the American Petroleum Institure (API), the American Society of Mechanical Engineers (ASME), the American Water Works Association (AWWA), the National Fire Protection Association (NFPA) and even the Food and Drug Administration (FDA) to govern standards and safety for storage tanks, but in the early days, there was no such governance.

Two significant and equally bizarre tank disasters occured in our early industrial history that remind us of the necessity of tank inspection and maintnenace. Athough they happened a hundred years and an ocean apart, in both incidents, valuable storage tanks became killers because they were not properly inspected or maintained.

At the time, beer was serious business, and beer-makers built ever-larger vats for storing, aging and otherwise perfecting their liquid gold. At the Horse Shoe, an enormous, monolithic porter vat was the symbol of the company's success and productivity. Made of wood and held together by 500 pound steel bands, the Meux & Co's porter vat held more than a million pints of brew. Like the hoops on wine barrels, the steel bands were key to the structural integrity of the tank. Because beer and money was flowing so freely, no one was keeping an eye on the condition of the giant porter vat. On the evening of October 17, 1814, one of the steel bands, compromised by rust and corrosion, gave way.

The first band broke apart and once that piece of the structure failed, the whole tank failed, launching a tidal wave of beer. As the porter vat's contents spewed, the wave of beer took out other tanks in the brewery, adding to the volume and strength of the porter tsunami. By some accounty, the beer wave crested as high as 15 feet.

If you can picture Charles Dickens' London, just add a tidal wave of beer and you have the seen that followed the failure of Henry Meux & Co.'s porter vat. The brewery was in the ares of London known as "the rookery" - a flat grid of streets with basement housing below street level. The overwhelming force of the beer pushing through the street casued dmage to homes and business and killed eight people. According to most accounts, the accident occured just at the end of the workday, so most men where not yet in their homes.The vicitims were women and children.

The Boston Molasses Flood of 1919

In 1919, in a bustling industrial area of Boston, the United States Industrial Alcohol Company's Purty Distilling Company had a full tank of molasses ready and waiting to transferred to another location in the city. At the time, molasses was the primary sweetener in the American diet, and it many other uses as well, including fermentation for pre-prohibition alcoholic beverages, and for the production of ethanol for use in the munitions industry.

The Purity Distilling Company building housed and enormous wooden storage tank - approximately 50 tall by 90 feet in diameter, by most accounts. The tank held approximately 2,500,000 gallons of molasses. The US Industrial Alcohol Company had the storage tank built just a few years earlier - and records indicate that no tests were performed before it was put into service. Some sources suggest that the company rushed construction in an attempt to beat Prohibition. The tank was filled intermittently, and leaked so much that people who lived closed to it collected their molasses straight from the leaky storage tank.

On January 15, 1919, it was unseasonably warm in Boston. Around lunchtime, workers in the Purity Distilling building heard what sounded likeclose-range machine gun fire and an enormous roar. The "gunshots" were rivets being shot out of the lower part of the tank, and the roar was the tremendous force of two and a half million gallons of thick, gooey molassess rushing out of the tank. The force of the moving molasses was so great that it sucked in and crushed the walls of the building.

The wave of molasses swept building off of their foundations and destroyed sections of the Boston Elevated Railway. Buggies, delivery vans, horses and people were overcome and swept up into the massive wave. In all, 21 people were killed by the molasses tsunami, some were burned, some suffocated and some were crushed by the force of the sticky goo. Inummerable horses were mired in the molasses and died as if caught in quicksand or a tar pit. Eyewitnessed described moving forms rising up from the brown mess, so completely covered in dark, sticky molasses that they were unrecognizable as human or animal.

The tidal wave of molasses reached 25 feet tall at its peak, and filled streets several blocks away with two to three feet of syrup. When clean up began, it was a huge, sticky mess and it took two weeks to remove the brown goo from buildings and cobblestone streets. Records indicate that clean up workers devoted about 87,000 man hours to the effort, and that Boston Harbor was brown for the next six months.

The incident produced an intense court battle. The US Industrial Alcohol Company claimed sabatoge by parties interest in preventing the molasses being turned into ethanol for use in munitions. Many speculated that the company had neglected to take the proper precautions before filling the tank. Shoddy tank construction was also suggested. According to the History Channel's report, "more than 100 lawsuits were filed against the United States Industrial Alcohol Company. After a six-investigation that involved 3,000 witnesses and 45,000 pages of testimony, a special auditor finally determined that the company was at fault because the tank used had not been strong enough to hold the molasses."

Both of these tragedies could have been prevented by proper tank inspection and maintenance! 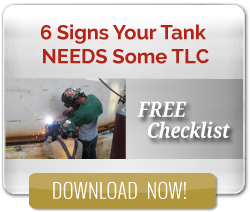 For more information about the Boston Molasses mess, check out The History Channel's account, Wikipedia or Slice of MIT.

Don't Touch That Storage Tank - You Don't Know Where It's Been!